A
great wine is true to its roots, vividly expressing its terroir. Rolling Hills Estate Winery challenges the limits of known viticulture with 20-acres of unique varietals, which are distinctive in their own right and need not fight for a place in the hierarchy, as they thrive in both the warm summers and cold Adirondack winters.

The Epitome of Natural Elegance

Set on a peaceful hillside along a quiet country lane, with the backdrop of beautiful Lake Champlain and the Adirondack High Peaks, sits the tranquil, yet stately vineyards of Rolling Hills Estate Winery.

With full day sun exposure, this 20-acre vineyard is breathtaking. Comprised of Vergennes clay, the roots of our vines grow deep and produce exceptional quality wines. Early winemaking trials gave the team the assurance that the vision was soon to come to fruition. The vines drink the natural mountain spring water that flows down from the High Peaks into the aquifers at the foothills of the Adirondacks, where our vineyards are located. The same spring and mountain water that Teddy Roosevelt had bottled and sent to the White House now nourishes our vines. 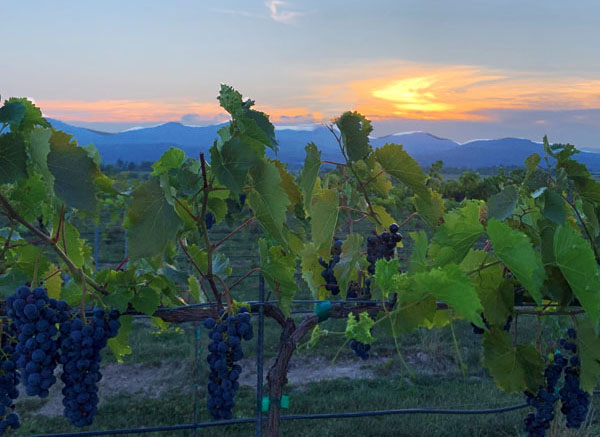 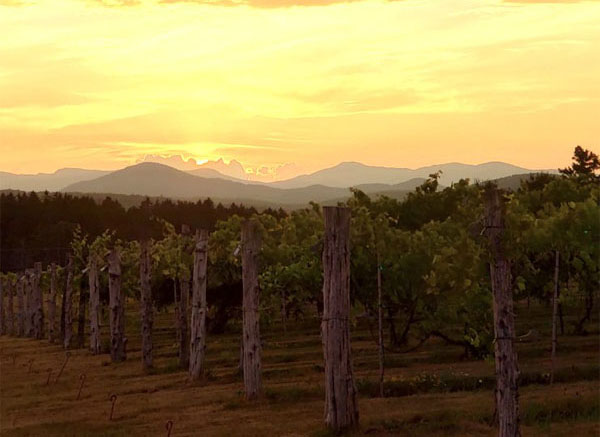 Aptly named for the many sheep and lamb who roam close by, this smaller vineyard is where our story began! With a unique collection of cold-climate varietals, we began our journey into winemaking. The success gained in this smaller, developmental vineyard was a precursor to the Old Schoolhouse Vineyard, where nearly 12,000 vines grow under the watchful eye of stately High Peaks. The unique terroir of predominantly clay and limestone is one of the main factors in Rolling Hills Estate Winery’s success, and ultimate flavor of our wines.

Our meticulously selected portfolio of wines highlights both the region and rich terroir. Each varietal brings its own flavor, tone, and quality. Our vines stand together, yet each differing with brilliant uniqueness and intense versatility.

Vibrantly aromatic and colorful with aromas of freshly picked pomegranate, cherry and raspberry, Marquette can carry savory herbal tones also. This grape variety can stylistically range from elegant and unoaked to heavier oaked versions. Due to its consistent quality, it is poised to be a leader in the Champlain Valley wine region.

With aromas and flavors of honey, nectarine and pineapple, the Frontenac Gris variety lends itself to off-dry wines with its bright acidity and tropical flavors.

Deeply colorful and aromatic with lots of strawberry and cherry, Frontenac remains the varietal offering the most opportunities for discovery. It lends itself well to rosé, due to its higher acidity.

With aromas and flavors of apricot, ripe pear and lemon, La Crescent grapes are versatile and produce both dry and off-dry wines, depending upon the approach to the variety. We see great things for this wine, including dry, off-dry and even sparkling wines.

With aromas of wild-picked forest fruits, peppery spice and herbs, St. Croix has crisp acidity alongside good tannic structure which makes it a perfect partner in blending, as well as a standalone wine that is more robust than others.

Aromas and flavors of fresh grape crush and herbs are the hallmarks of Sabrevois grapes. This variety is simple in flavor and lends itself well to our rosé wines.

As we soon embark on crushing our Petite Pearl grapes, we are confident it will lend true to its reputation in delivering concentration and power at lower acidity levels. Petite Pearl offers a different style within the Rolling Hills Estate Winery portfolio – more oak driven and powerful relative to its red counterparts.

Newly planted this year and with characteristics similar to that of Petite Pearl, our artisans are excited for this grape’s harvest. Lower acidity allows the wine to be fermented dry without tasting too tart, while tannin provides the mid-palate structure one would expect in a good quality, age-worthy red.

The Distinction in Differentiation

Most unique to Rolling Hills Estate Winery is the opportunity to learn about wine firsthand from the people who craft it. Very few properties in the world offer the chance which awaits you. The natural, intimate setting allows us to offer wine-focused experiences, ranging from in-vineyard walkthrough to winemaking discussions covering every detail of the process.

Beyond the extensive wine list, we invite you to join us for Sommelier-led wine tastings, exploring not only our wines and techniques, but the people, places, grapes, and styles that make the Champlain Valley and New York wine so truly distinctive. Taste wine with context and watch your personal wine journey soar to new heights, discovering the beauty of what our great state can produce. Whether you’re new to wine or a seasoned oenophile, we welcome you to become a part of the Rolling Hills Estate Winery family!

Our Winemakers will walk among the vines with you and take you through the process from vine to bottle. Join us for the unique opportunity to explore, sip and savor Rolling Hills Estate Winery’s private wine collection. Whether red, white or rosé, be a part of a special group with access to these small-batch meticulously crafted wines with limited allocation. Explore where a life of winemaking can lead.

Discover our wines through Sommelier-led wine tutorials and tastings. Spend dedicated time with the expert winemakers, who are eager to share knowledge and their ardent joy of this timeless craft. Partake in Winery Barrel Tastings alongside our team and with friends, old and new. Enjoy chef-created masterpieces and farm-to-table fare paired with perfectly selected wines. Private wine events, tours, and experiences are all part of your experience at Rolling Hills Estate Winery. “The wine tastings and vineyard tours were also a highlight, as we learned so much about wine (growing, making & drinking it), as well as the Adirondack culture and surrounding landscape. It really made us fall in love with the place and we could do it all together, which was the best!” Born and raised in NYC, Dan’s lifelong passion for ice hockey often brought him to Lake Placid, NY, home of the ‘Miracle on Ice’ at the 1980 Olympics.  The Adirondacks have always held a special place in Dan’s heart and it was a place he would later call home. In 2003, Dan began winemaking more seriously and by 2005, he began to share this wine with friends. He found the allure of winemaking to be the perfect blend of art and science. The joy of those early small batches is something Dan has always held onto. Dan was a part of the original team that set forth on the mission to discover the possibilities of winemaking in Westport, NY. His knowledge of the terroir, science and art of winemaking, coupled with his holistic approach to the land, has brought Rolling Hills Estate Winery to where we are now.

Dan lives with his wife, two twin girls, and a menagerie of farm animals, including his beloved llama. His greatest joy is that his daughters now work alongside him in the summer learning to nurture and tend the grapes. Born and raised in the North County, RJ first stepped onto Rolling Hills Estate Winery as a 15-year-old young man. His work ethic was evident even then as he spent his summers working on the property. Eleven years later, RJ has become a key player in the success of both the vineyard and winery. His keen knowledge of the property and the sophisticated equipment needed to plant, tend, and produce wine, has made him one of Rolling Hills Estate Winery’s greatest assets.

“It all starts with the ground, the soil, and keeping these two perfectly balanced, so our grapes can grow under the most ideal conditions. I am always humbled to be able to work in an environment with such majestic views. Being a part of this truly innovative project has given me a new perspective for amazing things to come and the growth of the North Country.”

When RJ is not riding tractors through the Vineyard, he spends his time with his loyal Bloodhound, Arti, and his two other rescue dogs. Charles was born in the bustling streets of Chicago’s infamous South Side. Every summer his family vacations brought him right here to Westport, NY, where he quickly learned to love the Adirondack region, its majestic mountains, and the beauty of the natural world surrounding it all. His interest in wine was sparked the first day he poured a glass for a customer at a local wine café. Coming to Rolling Hills Estate Winery as a humble bartender, his interest was transformed into love when he was offered the opportunity to join the Rolling Hills Wine Team. A door to a whole new realm opened for him — a once-in-a-lifetime chance to learn, hands-on, every step involved in the process of winemaking.

“Maintaining a clear path from the vineyard to the bottle allows us to reflect upon what is uniquely special about Rolling Hills Estate Winery and the wines we create: the sense of community, in partnership with the rich, fertile land.”

Embracing this new world with a youthful spirit, determination, and a great measure of patience, Charles eagerly embraces the wonders that are in store for the future of cultivating cold-hardy varietals, the new frontier of stylistic wines that can be crafted from them, and the simple bliss of sharing this adventure with kindred spirits!

”We consider ourselves to be well-traveled, but I have not come across a group of such humble, knowledgeable, and openly friendly people.” 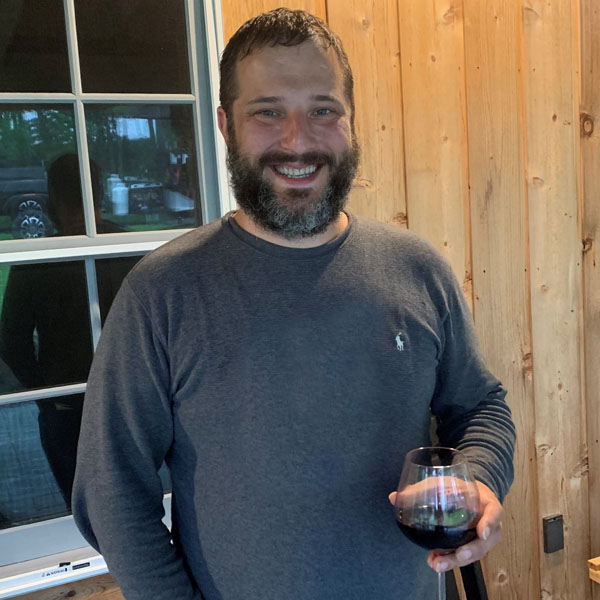 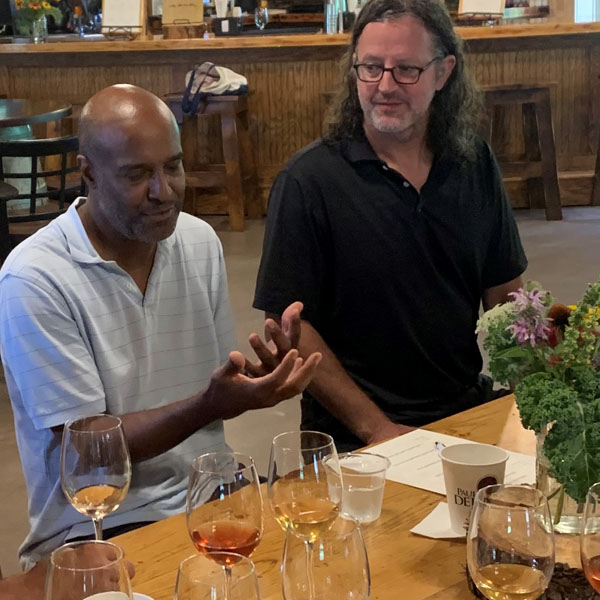 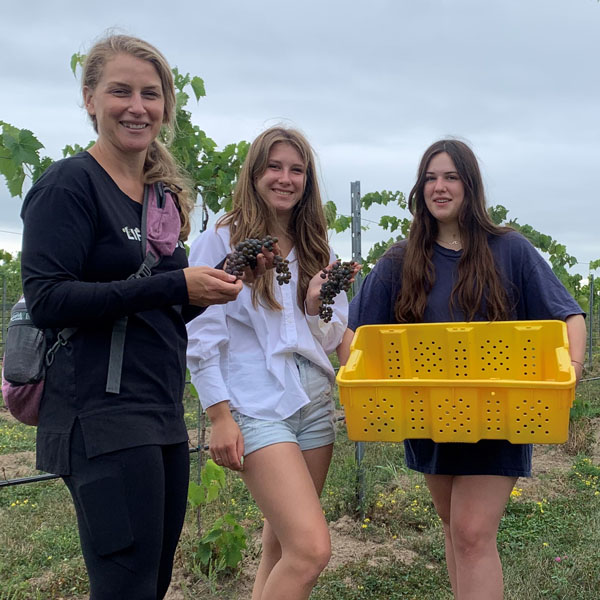 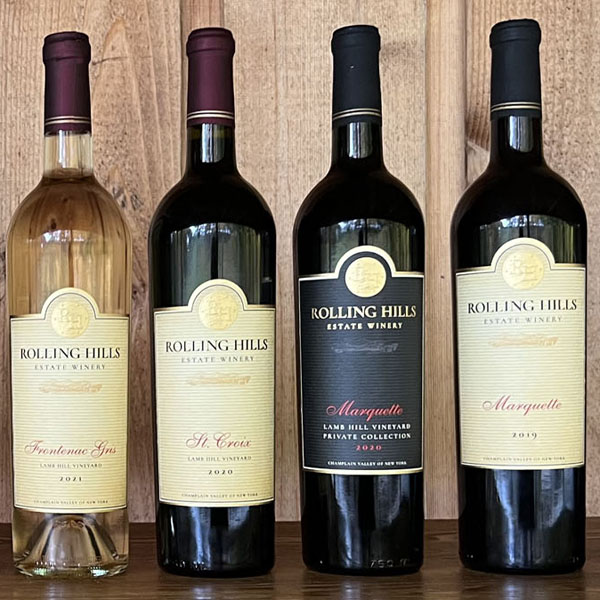 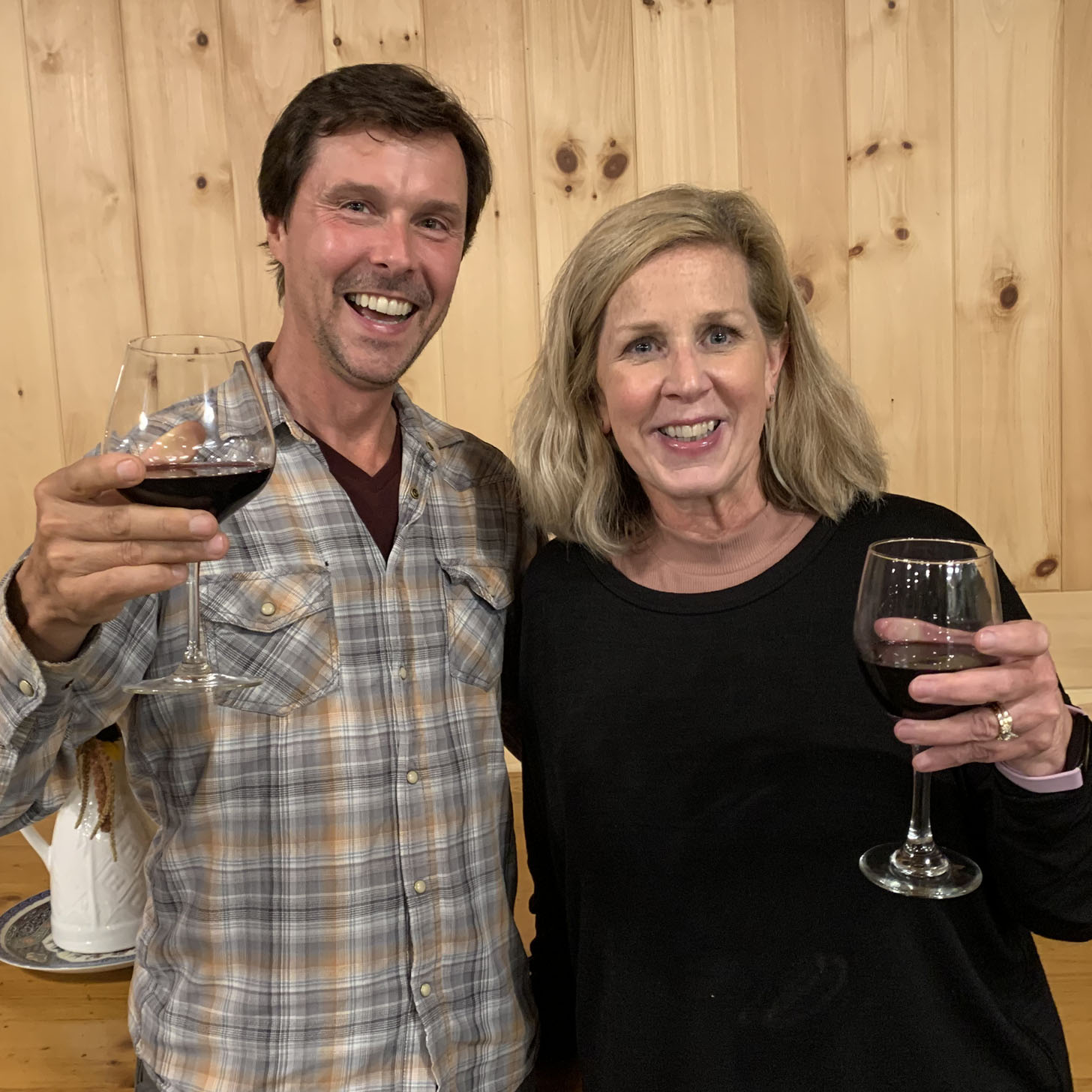 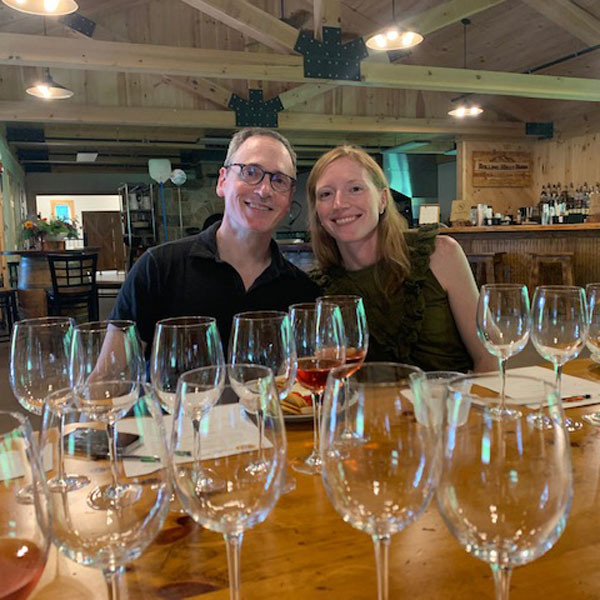 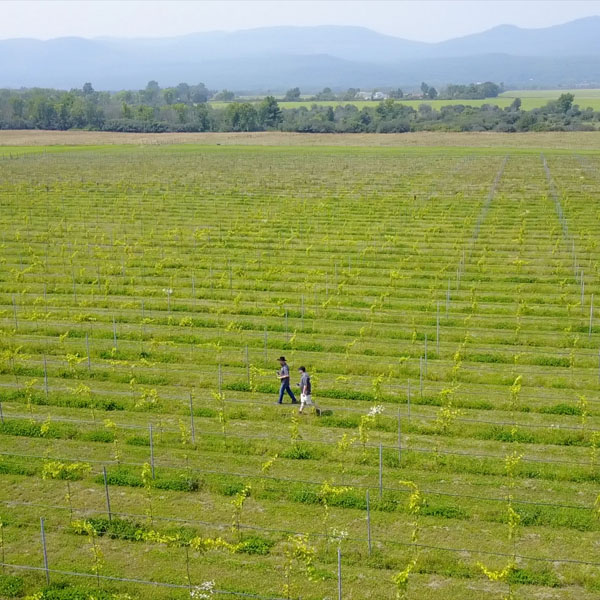 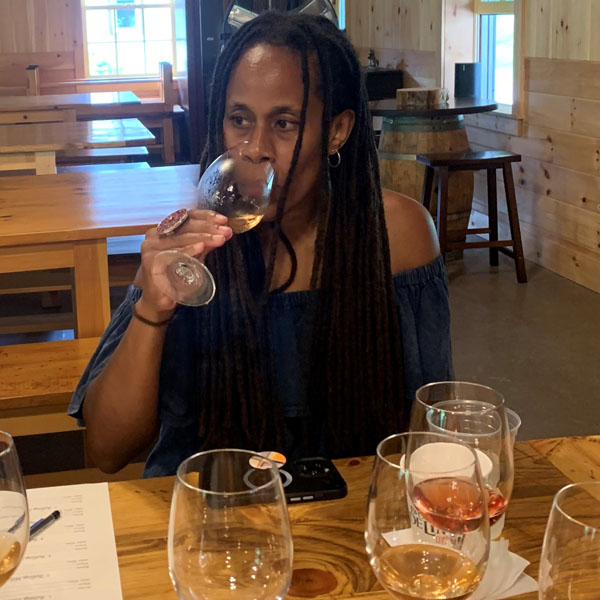